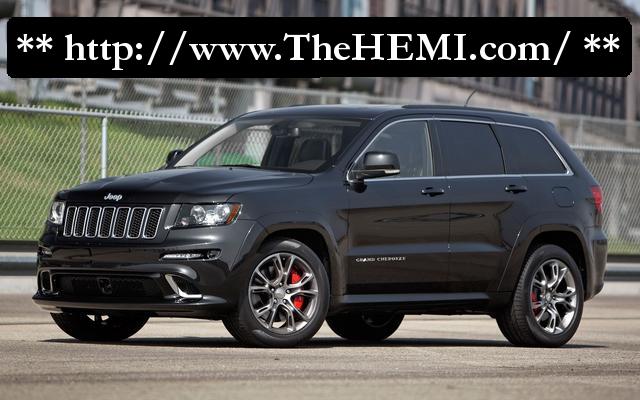 
The traditional performance plan for Jeeps was to unbolt, unzip, unsnap, and otherwise dismount every component that wasn't necessary, then mount the biggest knobby tires possible and head for the hills. The SRT guys have gone the opposite direction by throwing technology and fat, sticky Italian tires at a Jeep to create a whole different monster. While the Grand Cherokee SRT8 may not have the precision of its Hemi-fied siblings, it might be even more fun. Throwing this 5200-pound SUV around corners gives you the same guilty pleasure as finishing a meal that earns you a T-shirt.

The big Jeep likes to be manhandled and tossed around. It will respond to smooth inputs, but it will return equal laziness. The stability control, electronic center, and rear differential work in conjunction to keep the big girl dancing through turns. In the figure-eight, the Jeep matches the Dodge Charger and Chrysler 300's lap times, but does it in a completely different way. The Jeep rotates on the brakes and then works the power through all four wheels on exit. You won't be winning any gymkhana trophies, but a controlled four-wheel drift is certainly possible. In normal driving, 65 percent of the 470 horsepower is sent to the rear, but the clutch-pack center differential doles it out where it can be utilized best. The rear-mounted electronic differential also uses clutch packs to send power side to side. The torque vectoring keeps the Jeep turning even when the front end is losing grip. It felt much more natural on the racetrack than it did on our figure-eight. In big sweepers, it is tough to keep a steady speed as small inputs in throttle will cause torque vectoring, but as soon as neutral throttle is needed, the added turning force goes away.

In most corners, the exit is foot down at the apex and don't lift, and this is where the Jeep really lives. The rear diff starts working as soon as you add in the throttle and doesn't stop until you lift or straighten out the wheel. At 25.8 seconds it beats the Porsche Cayenne S around the twisted loop by 0.3 second and betters the BMW X5 xDrive 35i by a full half second. It doesn't feel as composed as the Europeans, and you don't feel like you can place the car as precisely, but this ain't ballet -- it's an SUV.

All the grip from the fat Pirellis help the big Brembo brakes haul the SUV down from speed as well. The front brakes have six-piston calipers clamping 15-inch rotors, while the rear has four-piston calipers over 13.8-inch rotors. Although it is more than 800 pounds heavier than the Charger and 300, it has the shortest stopping distance at 106 feet from 60 mph. That's a full 7 feet shorter than the last Porsche Cayenne S and X5 xDrive 35i we tested. That same Cayenne is no match for the Jeep off the line, either. The 6.4-liter Hemi pulls from 0-60 mph in 4.6 seconds -- 1.3 seconds faster than the 4.8-liter Porsche.

From a standing start, the Jeep is surprisingly uneventful. Floor the throttle and what would result in two smoking stripes in other SRTs is a big squat, a little chirp, and brutal acceleration. Gearshifts are definitely slower than the competition's. The old five-speed automatic is past its prime and showing its age. SRT says a newer transmission with more ratios will show up in a couple of years, but until then, this one will have to do.

The quarter-mile comes up at 13.3 seconds, showing 103.2 mph for the Jeep while the Porsche manages 14.4 seconds at 98.7 mph. The Jeep SRT also comes in nearly $10,000 cheaper than the Porsche. The BMW fares worse than the Porsche, as the X5 xDrive 35i runs 0-60 mph in 6.1 seconds, 0.2 second longer than the Porsche and 1.5 seconds longer than the Jeep. In the quarter-mile, the 3.0-liter turbocharged BMW runs a 14.6 at 92.5 mph, roughly 10 mph slower than the SRT8. Before all you Jeep owners go out trolling for Cayennes and X5s, remember there are faster versions out there, although the BMW X5 M is roughly $30,000 more, and the Porsche Cayenne Turbo is only a couple grand short of double the price. Suddenly the Jeep seems like a bargain, even if it can't go off-road and the doors don't come off.

That's a good looking SUV! And fast! And expensive.