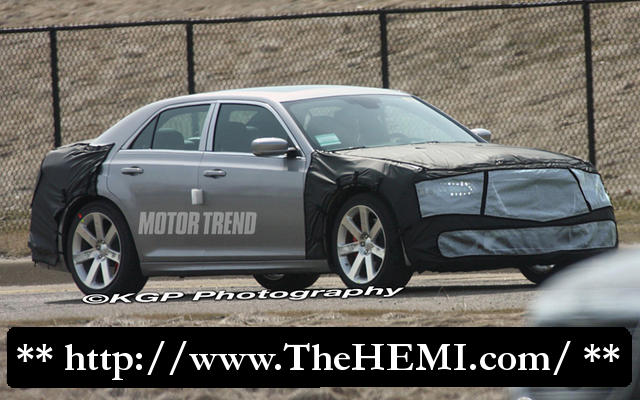 
We told you there’d be SRT8s, and we wouldn’t disappoint. You’ve seen the Dodge Charger SRT8 and the Jeep Grand Cherokee SRT8′s been spied, and now we have the final piece of the puzzle, the next Chrysler 300 SRT8.

Spotted testing up in Michigan, there’s no mistaking this camo’d car. Those big seven-spoke wheels can’t wait to show off the massive slotted brakes and four-, or perhaps even six-piston calipers. Looking closer, we can see a new mesh grille and some revisions to the lower front fascia with more aggressive air intakes. Around the back, beefier tailpipes are obvious and appear to be accented by a new dark chrome trim piece between them. Can’t miss that big lip spoiler on the trunk, either.

With the 6.1-liter Hemi V-8 on the way out, the new 6.4-liter mill seeing duty now in the Dodge Challenger 392 is almost certainly headed under the hood of the 300. Tuning will no doubt be different between the various SRT8s, but something in the neighborhood of 470 horsepower and 470 pound-feet of torque is expected. The 363-horsepower 300C can already run to 60 mph in 5.5 seconds with that old five-speed slusher behind it, so we’re expecting low fives if not better from an eight-speed equipped 300 SRT8.

With the 300 just starting to get to dealers in volume now, we likely won’t be seeing the SRT8 on the road for a while yet. If we’re lucky, it may debut by the end of this year if not early 2012. Stay tuned.

Very nice....almost understated, even for a Chrysler.
Top
Post Reply
3 posts • Page 1 of 1