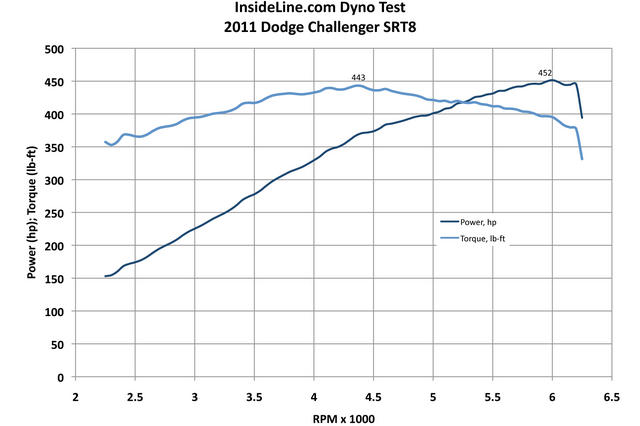 
It's not likely the 2010 Dodge Challenger SRT8's 6.1-liter V8 strikes you as meek. However, in a move that surely rankled Dodge's marketing gang, the Camaro SS debuted with 426 horsepower to the SRT8's 425. That's too close to be a coincidence.

There's just one thing to do. See, there's an old adage among hotrodders, and that's: Adequate substitutes for swept internal capacity are curiously nonexistent.

No, that doesn't sound quite right. It's... There's no replacement for displacement.

Dodge is reintroducing the storied 392 V8 engine for the 2011 Challenger SRT8. That's 6.4-liters for you metric weenies -- 0.3-liter more than the outgoing SRT8 -- and it all adds up to one mean Mopar. We'll have a full test including video of the Challenger SRT8 soon but in the meantime, check out how the bored and stroked Hemi fares on the dyno after the jump.

Okay, the 392 is actually 0.8 cubic inches shy of 392 cubic inches, but such white lies aren't unheard of -- examples like the Ford 5.0 (a 4.9-liter); the AMG Mercedes-Benz 6.3 (6.2-liters) come to mind. Heck, even the "Hemi" label itself is bogus for the moden version as it has pentroof combustion chambers and not hemispherical ones.

Whereas the 6.1-liter was relatively thin at lower revs, the 392 delivers big torque off idle, and brings a friendly torque curve with no flat spots or hiccups. On the dyno it was dead-repeatable, and the autobox's manual mode let me hold the gear of my choosing as far down in the rev range as I desired without deciding it was smarter than me and delivering a bunch of unwanted downshifts upon goosing it. Nice.

About the SRT8's cross-town rival, the Camaro. It happens that we dynoed our long-term 2010 Chevrolet Camaro SS on this very dyno last year.

That's pretty much an butt-kicking, particularly in the midrange where the 392 wallops the Camaro's LS3 V8 by some 100 lb-ft. The Chevy's ability to rev slightly higher isn't nearly enough to make up for the huge disparity in weapons-grade grunt. However, the SRT8 costs substantially more than the SS, and there's a supercharged Camaro Z28 on the horizon.

This brings to mind another old adage: Velocity is proportional to the weight of your man-purse; can you kick down a tenspot for beer and nachos? I'm pretty sure that's how it goes.

452-rwhp on an advertised 470-hp engine. I'm guessing there's more than 4-5%
lost through the drivetrain, leaving us w/ an underrated 470-hp Challenger SRT8!

Man, I wish I had the money!!!
Scott Moseman
http://www.TheHEMI.com/
Follow us:

Hennessey put the 392 SRT8 on their dyno during the HEMI Highway Tour.
Not quite as high on the numbers, but still very respectful HEMI results.


The Hennessey technicians quickly quick set-up the chassis dyno and calibrated the equipment. We fired-up the mighty 392 and made some warm-up runs and then dropped the hammer. Like a sucker punch to the face, the graph on monitor flashed the numbers – 432 rear wheel horsepower and 424 rear wheel torque!

Follow the link to watch and, obviously, hear the 392 HEMI on the dyno.
Scott Moseman
http://www.TheHEMI.com/
Follow us: