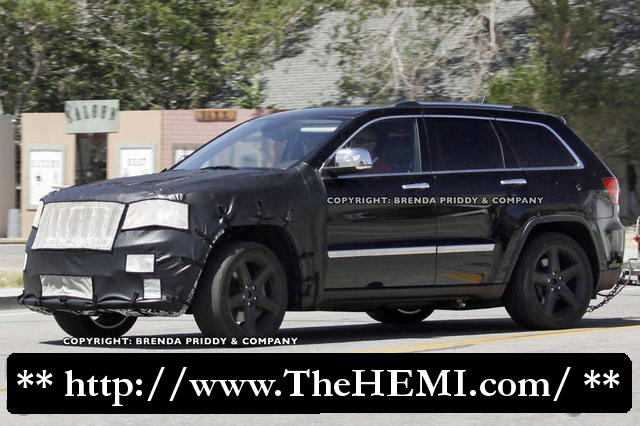 
It's badged as a 4x4 Limited model, but there's little doubt that this is a prototype for the next-generation Jeep Grand Cherokee SRT-8. Note for instance the enormous front fascia that hangs low just like the original Grand Cherokee SRT8's did. Note further the pooched-out fenders, big black wheels, massive tires and conspicuously lowered ride height.

Around back, you'll see there's no central-exit dual-exhaust, but as with the badging and extraneous chrome trim, that's easily changed on a production version. Nothing's a done deal in the current era of Fiat-Chrysler, but assuming Sergio Marchionne likes what he sees, we'd guess this will be a 2012 model.

The most likely engine for the 2012 Jeep Grand Cherokee SRT-8 is the 6.4-liter Hemi V8 in development for Chrysler's next generation of high-performance (SRT-8) models. The folks at Allpar, who have their ears to the ground for all things Mopar, predict that this engine will make about 480 horsepower and 460 pound-feet of torque in the Challenger SRT-8, so look for similar numbers in the Jeep. This would be a pretty significant increase over the original SRT8 Jeep (420 hp, 420 lb-ft). And with the 6.4-liter matched to the ZF-designed 8-speed automatic transmission in the works for all Grand Cherokees, this should be a very quick SUV. 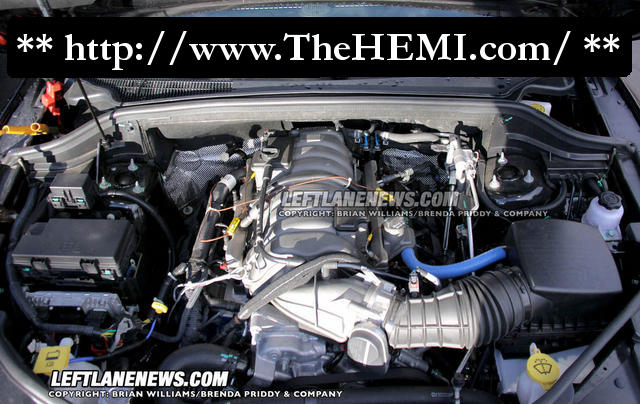 
Chrysler is currently gearing up to launch several new models, including the 2012 Jeep Grand Cherokee SRT8 shown here. While we’ve seen the Grand Cherokee SRT8 out testing before, our spy photographers have managed to snag the first images of the Chrysler’s new 6.4L HEMI V8.

The wheels, tires and brakes tell the tale on this test car as all three components match the last-gen Grand Cherokee SRT8 very closely. However, underhood lies a new engine, which will make it beneath the bonnet of all of Chrysler’s SRT8 offerings.

Trumping the current Grand Cherokee SRT8′s 6.1L HEMI, Jeep’s newest high-performance model will come packing Chrysler’s updated 6.4L V8, which is seen in our spy shots for the first time. Although previous reports suggest the bigger engine would receive a rating of 450-480 horsepower, our spies say this new Jeep will be good for at least 500 horsepower. The new engine is expected to be mated to a new 8-speed transmission.

Putting power down through all four wheels, the 2012 Jeep Grand Cherokee SRT8 should easily be able to make the sprint from 0-60 in under 5 seconds, giving the Porsche Cayenne and BMW X6 reason to sweat.

No word on when the 2012 Jeep Grand Cherokee SRT8 will make it official debut, but we suspect we could see it on the auto show circuit by the end of the year.