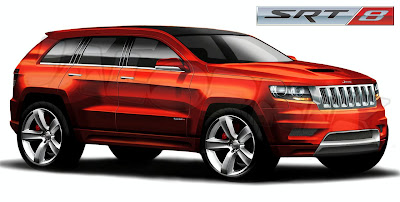 The biggest news we've received is the high-po Jeep will receive the 6.4-liter 392 HEMI V8 with anywhere between 505-525 tire burning horsepower and roughly 510 ft-lbs of torque, all driven through a revised AWD system. The 392 HEMI has also been rumored to show up in other 2010 SRT8 models, but we're guessing it'll arrive first in the mid-cycle refresh for both the Challenger and Charger in 2011.


The new engine will be called the 392 HEMI (in reference to its capacity in cubic inches) and is expected to first appear in updated versions of the Dodge Challenger and Charger in 2011.

I think it will be interesting to see if this actually pans out or not. We
all would love to see it and with the 5.7L going up in power we need a
larger gap between standard and SRT HEMIs. But with the economy in
bad shape and Chrysler in financial trouble, will they still proceed?
Scott Moseman
http://www.TheHEMI.com/
Follow us: